This is episode 56 of The Drone Trainer Podcast, and this week we’re going to hear from Sparky Sorenson, a drone pilot from Dallas Texas. Check this episode out and subscribe on iTunes or Google Play so that you don’t miss this or any of the future podcast episodes! 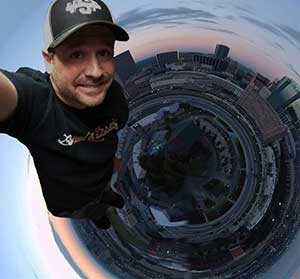 Sparky Sorenson is a drone pilot form Dallas Texas, currently fling the DJI Phantom 4 Pro and DJI Inspire 2 models. Sparky has been flying since 2014, when he was in a band and taking a lot of cross state roadies. During these trips he started to explore video editing, and eventually added on a drone! His first drone, like mine, was the Phantom 2.

Flying mostly cinematography, and mapping missions, his choice in the P4P and I2 is obvious. The quality and calibre of footage you can get from the I2 is exactly what his film and television production clients want. The P4p and it’s global shutter is also perfect for his mapping missions.

Speaking of mapping, Sparky is utilizing the Propeller Aeropoints for many of his jobs. If you’ve taken my Drone Mapping 101 course, you’ll recall that I also use Aeropoints during the training to show you how easy it is to mark your ground control or manual tie points in post processing. If you haven’t checked out the course yet, be sure to head on over for all the details!

We also discuss some of the advantages of the DJI Inspire 2, including the FPV camera. Just in case those fancy tools fail on you, be sure to check out my training that shows you how to get the drone back if you lose your video feed or orientation!

I won’t get into too many details in this blog post, so be sure to listen in to hear how Sparky flew at an airport. Yeah, I know many of us have flown in controlled airspace, but Sparky flew right in the middle of an active airport. Very, very cool stuff!

I hope you enjoyed this week’s drone podcast with Sparky Sorenson! Once you’ve had a listen, feel free to leave a comment below so that Sparky and I can hear what you think!

Check out Sparky’s work and follow him on social media!