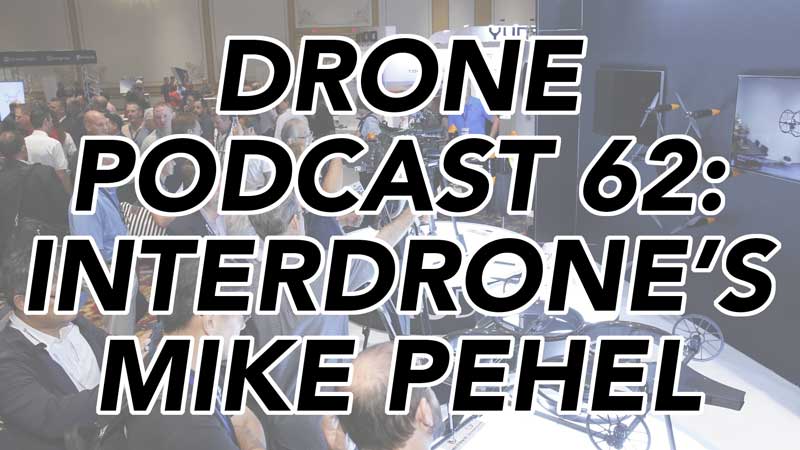 Welcome to episode 62 of The Drone Trainer Podcast! This week we’re going to chat with the chairman of InterDrone, Mike Pehel. Check this episode out and subscribe on iTunes or Google Play so that you don’t miss this or any of the future podcast episodes!

Mike Pehel is the newly appointed chairman of InterDrone, a massive drone show based in Las Vegas, NV. While Mike isn’t a drone pilot himself, he has vast knowledge and can provide a 20,000′ view of the drone industry. Why isn’t he a drone pilot? Well, he lives on Long Island, and is unfortunately dominated by controlled airspace. Yes, there are ways around it, but as a recreational pilot it can be too much tape to deal with just to get off the ground.

The good news for us is that Mike is concentrating his efforts on InterDrone. InterDrone is the largest commercial drone event in North America, and will be held at the Rio in Las Vegas, Sept 3-6, 2019.

In this episode, we chat about everything from drone delivery, to drone pilot licensing. Licensing is a topic that I’m fond of, as I feel there is room for improvement in countries that aren’t conducting flight reviews. Why is it good enough just to complete a written exam, but not show your flight skills in the field? Some might say it’s not a big deal, but think of a comparison to your automobile drivers license. Can you imagine just writing the test, and then being handed your license? Right? I think that every country should employ flight exams, to ensure that they’re handing the keys over to capable drone pilots. Transport Canada recently added this requirement to their new licensing system, and I suggest that the FAA should follow suit.

As for drone delivery, we discuss what it could look like, and my prediction for what industries are going to be the winners. Currently everyone wants their toothbrush delivered by Amazon, however I think that medical services will be the ultimate beneficiary of drone delivery. Now, we just need the UTM to catch up to the already capable flying tech.

I hope you enjoyed this week’s drone podcast with InterDrone’s Mike Pehel! Once you’ve had a listen, feel free to leave a comment below so that Mike and I can hear what you think!

Check out Mike’s work and follow him on social media!