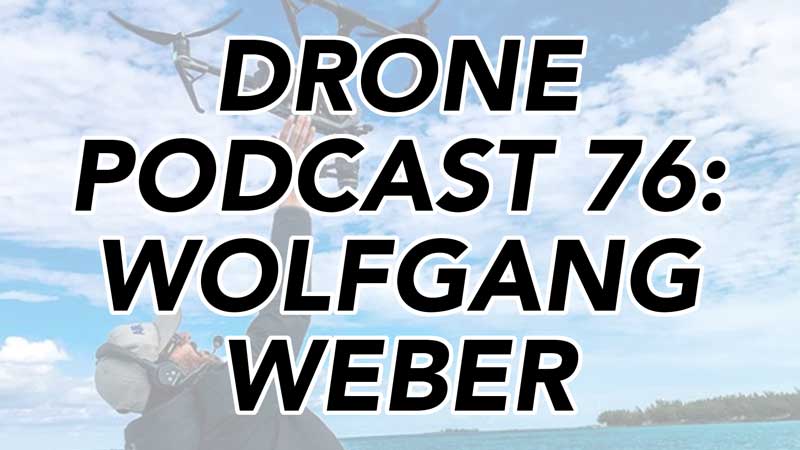 Moving from Canada to California, with the dream of being an actor, this week’s guest has come out on top. Not only did he make a splash as a Hollywood actor, Wolfgang Weber has also created a successful drone business!

Wolfgang Weber (IMDB) is from Ottawa, but moved to Los Angeles 11 years ago to follow his dreams. Waiting tables led to a few acting gigs, then a few drone gigs, and then a few combo drone and acting gigs! Being a drone pilot, he was able to negotiate a few early roles based on his drone skills, while also inserting himself into the script. Since picking up the sticks, he’s started AIRWOLF Drones.

Wolfgang started flying a DJI Phantom in 2015, and has since moved up to the Inspire, newer Phantoms, as well as the M600. He also drops a total bomb about the DJI Zenmuse X7 that I was shocked to hear!

So far, Wolfgang’s favourite projects have been resort work down in the Bahamas, as well as chasing Ferrari around a track during the Ferrari Challenge in California. He worked the Ferrari Challenge along with LA Drones, and their fleet of Inspire 2’s, and where their work was broadcast live back to Italy. Talk about an awesome job, where you have you have to be on top of your game! Fellas, sign me up for the next go round!

Things aren’t all roses though, as Wolfgang has experienced some trouble with his Inspire 2. He’s had issues with a limp gimbal, batteries not connecting, gimbal vibration port, and a variety of other errors. He’s tried refreshing the firmware, however it seems to be a constant problem for him. Luckily, he’s part of a great network of drone pilots in Los Angeles, so if his drone has trouble, there is always another Inspire 2 nearby.

So, being an actor as well as a drone pilot, I had to ask for tips on how to get into the industry. Wolfgang doesn’t hold back as he lets us know exactly what you should do if you’re interested in becoming a Hollywood drone pilot. He recommends creating a demo reel with the following:

And then hit up production companies that don’t have a drone department. Go in there and offer your services with your demo ready to go. Having all of your FAA permissions is important, including night waivers. The night waiver alone has got him a lot of work, so make sure that you get that sorted out before approaching Hollywood production companies!

If you like what you heard from Wolfgang Weber, get out there and take action! Maybe you’ll even see him on set sometime! And, if you’d be awesome enough to share this episode with your other drone friends, I’d be ecstatic! Share away, and keep the spinny side up!

I imagine after listening to this, that you’re pumped and ready to go kill it with your drone business! Take all these tips, get some motivation from Gary Vee, utilize the Facebook pixel, and make it happen! I’d love to hear about your successes when you employ some of the drone marketing tips and tricks that Bobby discussed during this chat!